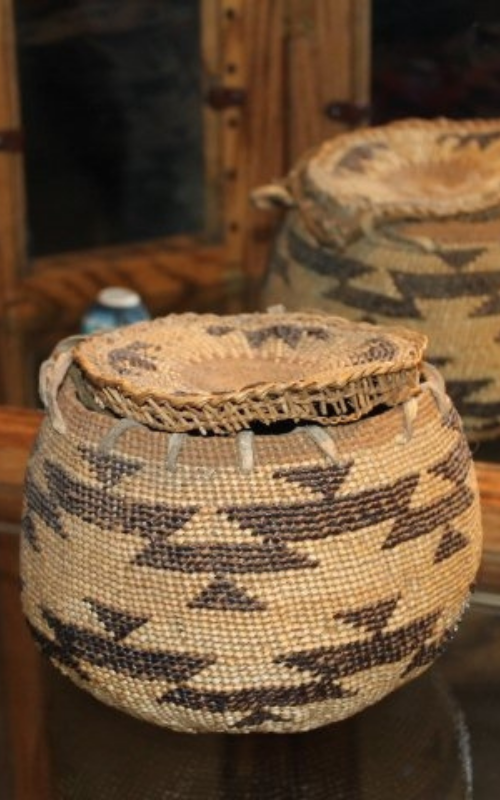 We are the Klamath Tribes- the Klamath, the Modoc and the Yahooskin-Paiute people, known as mukluks and numu (the people). We have lived in the Klamath Basin of Oregon, from time beyond memory. Our legends and oral history tell about when the world and the animals were created, when the animals and Gmok’am’c – the Creator – sat together and discussed the creation of man. If stability defines success, our presence here has been, and always will be, essential to the well-being of our homeland and those who abide here.

In the old times we believed everything we needed to live was provided for us by our Creator in this rich land east of the Cascades. We still believe this. We saw success as a reward for virtuous striving and likewise as an assignment of spiritual favor, thus, “Work hard so that people will respect you”, was the counsel of our elders. For thousands upon countless thousands of years we survived by our industriousness. When the months of long winter nights were upon us, we survived on our prudent reserves from the abundant seasons. Toward the end of March, when supplies dwindled, large fish runs surged up the Williamson, Sprague, and Lost River. At the place on the Sprague River where gmok’am’c first instituted the tradition, we still celebrate the Return of c’waam Ceremony.

The six tribes of the Klamaths were bound together by ties of loyalty and Family, they lived along the Klamath Marsh, on the banks of Agency Lake, near the mouth of the Lower Williamson River, on Pelican Bay, beside the Link River, and in the uplands of the Sprague River Valley. The Modoc’s lands included the Lower Lost River, around Clear Lake, and the territory that extended south as far as the mountains beyond Goose Lake. The Yahooskin Bands occupied the area east of the Yamsay Mountain, south of Lakeview, and north of Fort Rock. Everything we needed was contained within these lands.

In 1826 Peter Skeen Ogden, a fur trapper from the Hudson’s Bay Company, was the first white man to leave his footprints on our lands. One hundred and seventy-five years later those footprints have multiplied into the thousands, each leaving their marks on the lands and the Klamath Tribes. The newcomers came first as explorers, then as missionaries, settlers and ranchers. After decades of hostilities with the invaders, the Klamath Tribes ceded more than 23 million acres of land in 1864 and we entered the reservation era. We did, however, retain rights to hunt, fish and gather in safety on the lands reserved for us “in perpetuity” — forever. 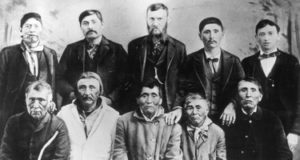 From the first, Klamath Tribal members demonstrated an eagerness to turn new economic opportunities to our advantage. Under the reservation program, cattle ranching was promoted. In the pre-reservation days horses were considered an important form of wealth and the ownership of cattle was easily accepted. Tribal members took up ranching, and were successful at it. Today the cattle industry still remains an important economic asset for many of us. The quest for economic self-sufficiency was pursued energetically and with determination by Tribal members. Many, both men and women, took advantage of the vocational training offered at the Agency and soon held a wide variety of skilled jobs at the Agency, at the Fort Klamath military post, and in the town of Linkville. Due to the widespread trade networks established by the Tribes long before the settlers arrived, another economic enterprise that turned out to be extremely successful during the reservation period was freighting, in August of 1889, there were 20 Tribal teams working year-round to supply the private and commercial needs of the rapidly growing county. A Klamath Tribal Agency – sponsored sawmill was completed in 1870 for the purpose of constructing the Agency.

There are several good sources of information on the Modoc War. Most recently, Cheewa James published a book on the war’s history, which is available at her website, www.cheewa.com. You can also download a PDF summary on the Modoc War.

By 1873, Tribal members were selling lumber to Fort Klamath and many other private parties, and by 1896 the sale to parties outside of the reservation was estimated at a quarter of a million board feet. With the arrival of the railroad in 1911, reservation timber became extremely valuable. The economy of Klamath County was sustained by it for decades. By the 1950’s the Klamath Tribes were one of the wealthiest Tribes in the United States. We owned and judiciously managed for long term yield, the largest remaining stand of Ponderosa pine in the west. We were entirely self-sufficient. We were the only tribes in the United States that paid for all the federal, state and private services used by our members.

In 1954, the Klamath Tribes were terminated from federal recognition as a tribe by an act of congress. During the process of termination, the elected Tribal representatives consistently opposed termination. There was, in addition, a report from the Bureau of Indian Affairs (BIA) which concluded that the Klamath Tribes were NOT ready for termination and recommended against it. Despite this consistent official opposition from the Tribes and the BIA, congress adopted the Klamath Termination Act (P. L 587). Not only did we see the end of federal recognition and supplemental human services, but tragically our reservation land base of approximately 1.8 million acres was taken by condemnation and the Klamaths were terminated as a Tribe. This single act of Congress had devastating effects on the Klamath Tribes and several other tribes across the country.

In 1974 the Federal Court ruled that we had retained our Treaty Rights to hunt, fish and gather, and to be consulted in land management decisions when those decisions affected our Treaty Rights.
In 1986, we were successful in regaining Restoration of Federal Recognition for our Tribes. Although our land base was not returned to us, we were directed to compose a plan to regain economic self-sufficiency. Our Economic Self-sufficiency Plan reflects the Klamath Tribes’ continued commitment to playing a pivotal role in the local economy.

During the Economic Self-sufficiency Plan (ESSP) development process, the Planning Department and other committees reviewed hundreds of ideas and concept combinations that would help attain our much-desired goal of long term economic self-sufficiency. After a lengthy analysis process the recommendation was made and accepted by the Tribal Council and the General Council, that the Tribes construct a casino. With our usual energy and determination the Tribes efforts became reality. In 1997, we opened the doors to our first enterprise in 45 years since termination… Kla-Mo-Ya Casino .